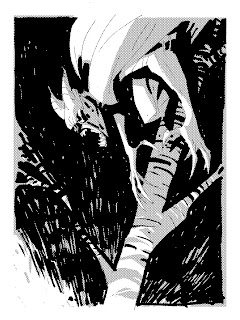 This was done last week at a local one day comic show.
I'm not sure what it is, or what it means.
Thanks for looking.
Posted by ANDY KUHN at 2:19 AM 6 comments: 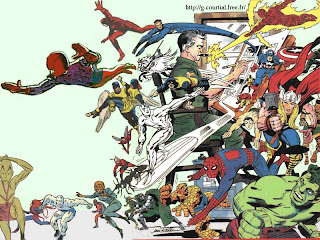 Tom Spurgeon over at THE COMICS REPORTER published a beautiful
set of images to point out that today would be Jack Kirby's 91st birthday.
Go HERE to see it.
You may not be able to tell from my artwork,
but I am an insanely huge Kirby fan.
The world will never see another one like him.
Happy Birthday Jack!

This might be my favorite Kirby page ever.
It's from DEVIL DINOSAUR #4.
So much awesome on one page.
My brain feel like she about to buss!!! 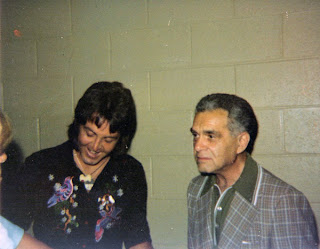 Here's the last known picture of Jack Kirby with Paul McCartney.
You still have to wonder what kind of music they would
be making today if The Beatles had kept Kirby in the band.
I'll leave it to better men to speculate.
All you need is Kirby!!!
Posted by ANDY KUHN at 9:32 AM No comments:

WHAT IS IT ABOUT BATMAN? 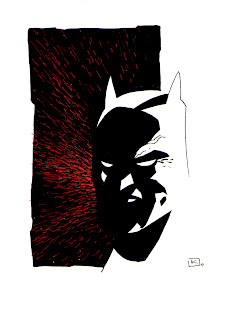 Batman is such an iconic character. I just can't stop drawing him.
I'd say thirty percent of the time that I start sketching with nothing
in mind, I'll end up drawing the caped crusader.
Here's another one that just popped out.
Thanks for looking.
Posted by ANDY KUHN at 10:13 PM No comments: 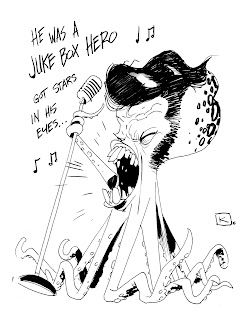 Many times at comic book shows I get asked to draw in someones
themed sketch book. Usually the theme is a specific character.
Sometimes they're more interesting than others. This is a sketch
I did for a guy whose entire book was Karaoke Squid.
I don't know where that came from, but it was a pretty cool sketchbook.
I realize that this is not a squid, but it's the best I could do at the time.
Thanks for looking!
p.s. Thanks to Jake Ekiss for shedding more light on Karaoke Octopus.
Click HERE to see other talented artists KO sketches.
Posted by ANDY KUHN at 9:13 PM 3 comments: 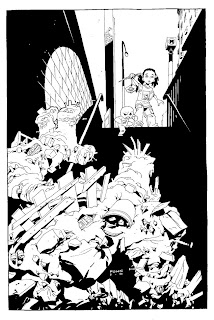 Here's a piece of art I did for a top secret project that
Phil Hester and I are going to make at some point.
I could tell you more about it,
but then i'd have to kill you.....with kindness!
Posted by ANDY KUHN at 7:11 PM 8 comments: 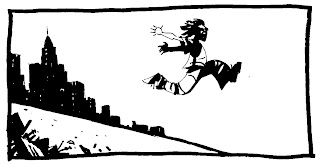 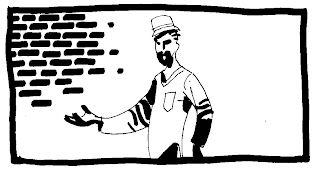 Awhile ago I was doing a lot of thinking about composition,
and how I needed to be better at it. Here's a batch of random
panels that I drew while either looking at, or thinking about,
how better cartoonists than myself approach composition.
Thanks for looking.
Posted by ANDY KUHN at 7:58 PM 3 comments: 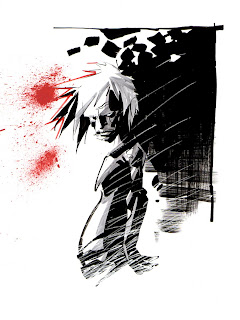 Here's another zombie for ya'lls to look at.
Choose life! 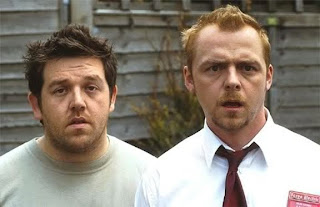 I recently spent two days as a VIP extra on the set of the new Simon Pegg, Nick Frost movie PAUL.

job of re-creating San Diego in the Albuquerque convention center.

The entire Image comics booth was set up exactly as it was four weeks ago at the real comic-con.

who leave comic-con and have a cross-country road adventure culminating a year later at San Diego.

The entire process was fascinating, and tedious. I doubt I'd ever do it again, but it was fun to do it once.

They were all exceptionally nice people for the short time that we spoke.

I'm a huge Pegg/Frost fan, so it was worth it to me just for that.

will be in theaters till late summer or fall of next year.

I think it's gonna be a pretty funny movie, mostly due to my breakout performance!

ps. I also need to give a massive shout out to Clinton Trucks. He's a completely awesome dude.

During the shoot he was the funnybook professionals on set wrangler.

Without him our stay in Hollywoodland would have been much less interesting. 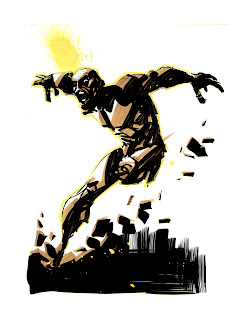 Here's a sketch i did recently of a man in motion.
I dream of being able to get this much energy
into my panel to panel comics work someday.
Ah, dreams......
Posted by ANDY KUHN at 1:44 PM 2 comments: 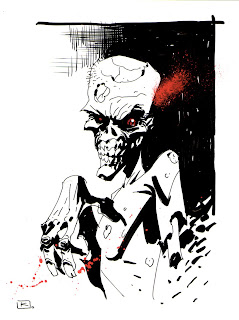 Here's a recent zombie drawing I did just for fun.
A brain is a terrible thing to waist! 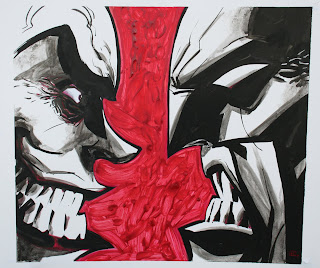 Here's the drawing I did for the Batman art show last weekend.
It's "Bats" and "Jokes" facing off on an 18" x 24" sheet of foamcore.
The piece was done with india ink, tempra paint, and markers.
Thanks much to my buddy David Harrigan for taking the picture.
Thank you for looking!
Posted by ANDY KUHN at 5:07 PM 5 comments: 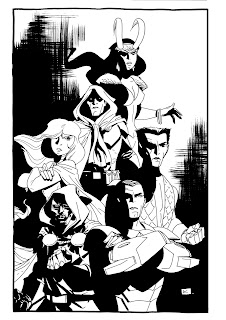 Here's a recent commission of The Cabal.
This is the group of bad guys who seem to be
running everything in the Marvel universe these days.
I hope you dig it. Thanks for looking.
Posted by ANDY KUHN at 7:36 AM 4 comments: 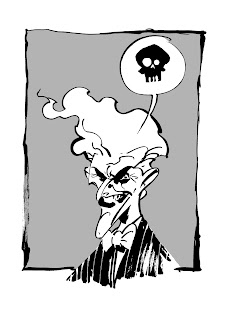 I am part of a one day Batman themed art show
here in Albuquerque on Saturday 8/8.
It's going to be at The Trillion Space at 510 2nd st. nw.
Most of what I contributed are pages
from the only Batman story I've drawn.
I did one new piece for the show.
I'll post that at a later date.
Just to get you in the mood,
here's a drawing of The Joker talkin' smack!
Live it!
Posted by ANDY KUHN at 8:47 PM 5 comments: 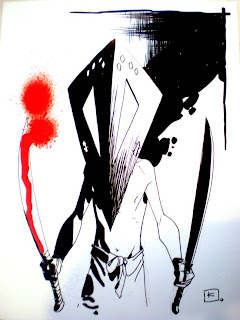 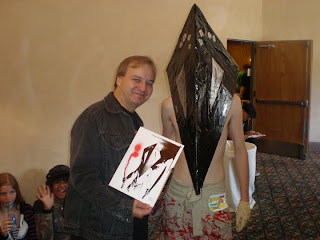 Here's a drawing I did at SWACE of a guy dressed as Pyramid Head.
I've also included a picture of me with young PH.
I'm not a gamer, so it wasn't till after I finished the drawing that
I found out that Pyramid Head is a character in the game SILENT HILL.
I just thought this kid had made this character up.
Oh grampa....you're so funny!
Posted by ANDY KUHN at 8:25 AM 3 comments: 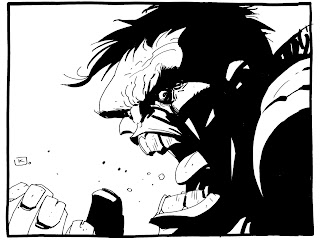 I had a great time as a guest of SWACE last weekend.
I got to meet Ralph Bakshi (animation pioneer),
Mike Sinterniklaas (the voice of Dean Venture),
and Samantha Harte (funimation voice actress),
exceedingly cool people, one and all.
Here's a drawing I did at the show.
It's The Incredible Hulk getting all angry and whatnot!
Keep it realz, people!
Posted by ANDY KUHN at 7:43 AM 5 comments: 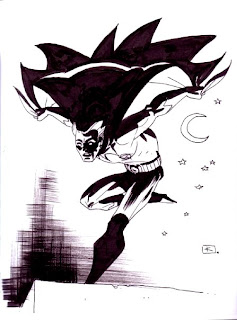 Here's a sketch I did at San Diego of the DC character Talon.
I wasn't familiar with him, but I guess he's kinda the new Nightwing.
I'm old.....stay off my lawn!
Posted by ANDY KUHN at 8:21 AM 5 comments: 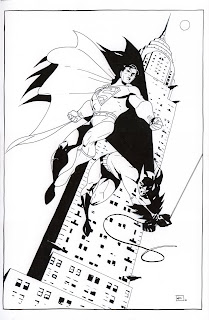 All apologies to anyone who regularly checks this blog.
I got back from San Diego, posted once and wham,
my computer decided to stop working.
Thankfully it was just a bad power supply.
The local Apple store hooked me up in fairly short order.
Here's a commission I did before Comicon.
Batman and Superman about to whup up on ya'.
Them's the Worlds Finest, baby!!!
Thanks for your patience, and thanks for looking!
Posted by ANDY KUHN at 9:19 PM 4 comments: