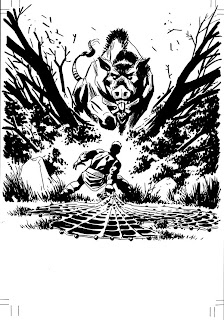 A little over a year ago i did a bunch of illustrations for a childrens book  adaptation of  THE TWELVE LABORS OF HERCULES. It came out from a company called Magic Wagon and was written by my buddy Shannon Denton.
I think if I had the chance to do it over today, I'd probably draw it in a much more cartoony, animated style. At the time I was very much interested in this brushy technique with heavily spotted blacks.  I'm pretty happy with the way some of the drawings came out, though. I'll post some of them from time to time.
This is labor number four in which Hercules had to trap the giant Erymanthian boar.
Thanks for looking.
Posted by ANDY KUHN at 1:06 AM

Man, I really need to pick up that Hercules book. I was interested in it a while back and it's freakin' Andy drawing Herc! I'm a big fan of Greek mythology so I'm definitely sold!

That is awesome! I shall be checking out more of your work.

thanks for the kind words all!

great composition and inks!
big fan of your work and blog!