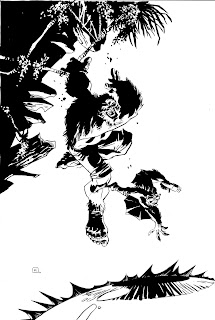 Here's a pinup that I did for an awesome
little book called The Perhapanauts.
It's written by Todd Dezago and drawn
by the incredible Craig Rousseau.
The printed version of this appeared
in their first trade and was colored by
my man Sean "Cheeks" Galloway.
I like drawing giant eyeballs!
Posted by ANDY KUHN at 7:24 PM

I still get giddy looking at this, brudda! I had a ton of fun splashing some color on it. You can post up the colors, too, if ya want.

wow!! i got nothing else to say. wow.

Really loving the contrasts and the composition on this, Andy :D
And congrats on the Heavy metal gig: I was buying it regularly until a couple of years ago: it's just hard to find that magazine regularly on the shelves, but I will make sure to grab the issues with your art in.